Honouring Our Past
Celebrating Our Future

Set sail on a voyage through OSTC history

Located on Owen Sound’s west harbour wall, installation will be available for viewing until October 18th, when the Chi-Cheemaun returns to Owen Sound for her winter berth. 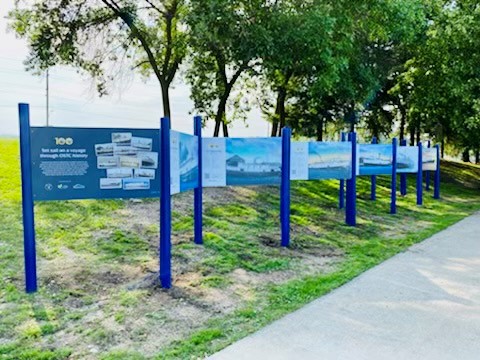 100 Years of our Vessels 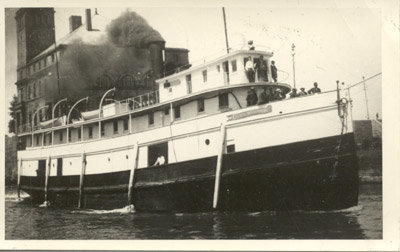 The Owen Sound Transportation Company (OSTC) began in 1921, formed by a group of local businessmen including W.G. Hay, president; J.H. Hay, vice-president; and J. Garvey, secretary-treasurer. The three were principals in Owen Sound’s North American Bent Chair Company and their objective was to use the company’s steamboat, the S.S. Michipicoten to provide freight-only service to isolated North Shore communities. The company had owned the Michipicoten for seven years but, until the creation of the Owen Sound Transportation Company, she was used primarily for hauling logs from Collins Inlet at Killarney. The S.S. Michipicoten continued its unscheduled freight-only service between Owen Sound and the Soo, calling in at Manitoulin Island and various North Shore ports. In October of 1927, Michipicoten caught fire at Silverwater. The crew was lucky to escape the fast moving blaze, which was fueled by a cargo of lumber and gasoline. Once they were safely on the dock, the crew used paddles and pieces of lumber to push the burning vessel away from the dock and wooden buildings of the tiny community, averting a total disaster. The ship was a total loss. 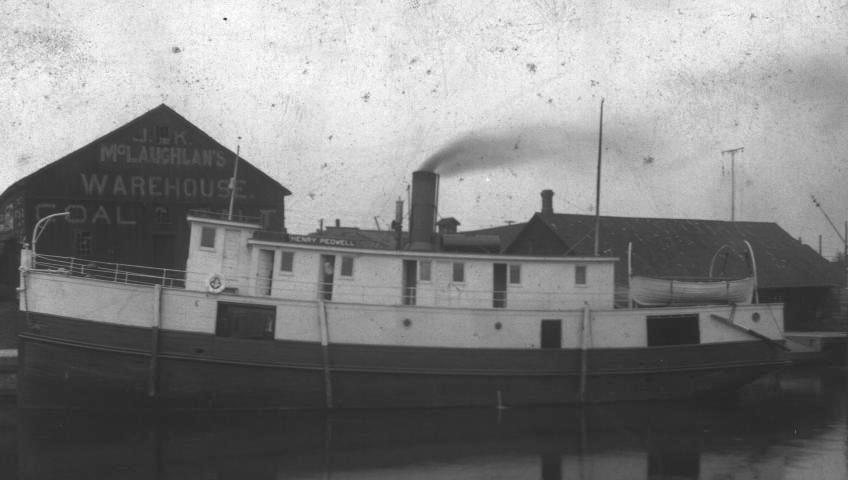 Captain John Tackaberry of Lion’s Head was the first to offer a regular ferry service between Tobermory and South Baymouth on Manitoulin Island. In 1917, he made runs up the Bruce and across to the Island and North Channel with the steamer Henry Pedwell. OSTC later acquired the service of the Georgian Bay and Manitoulin Transportation Company and its steamer the S.S. Henry Pedwell, which they renamed S.S. Kagawong. During July and August, the Kagawong made daily trips leaving Tobermory at 12 noon and 6:30 p.m. and South Baymouth at 8:30 p.m. and 3:00 p.m. The passenger fare was $3.00 and cars varied from $4.70 to $5.70 each way.

The Dominion Transportation Company began service on the Georgian Bay and the North Channel in 1902. As a wholly owned subsidiary of the Booth Fisheries Company of Chicago, Illinois, its prime purpose was to gather the catch of the commercial fishermen at various ports of call and then ship the fish to wholesale branches in Canada and the United States. Their ships, the Manitou and the Caribou, were small wooden vessels which had been built in Goderich especially for the lake trade. Both served on the ferry route.

It was late in the sailing season and the only ships of the pool service still in operation were the Hibou, owned by Dominion and the Normac. The Manitou, the Caribou and the Manitoulin had already gone into winter quarters. The decision was made to take one last run to the North Channel to bring winter supplies to its isolated communities. A new compass had been installed which Captain McKay decided to test before getting too far from port. After a few minutes of running, he ordered the wheel hard aport. Allan responded and, at the same time, McKay rang the engine room and ordered the port engine stopped. The Hibou swung sharply to port and McKay commented that she was turning unusually fast. Partway into the turn, the Hibou began to take on a starboard list, which was not unusual, but instead of recovering, she continued to go over. In the end, 7 people perished, including Captain McKay.

In 1926, the Owen Sound Transportation Company purchased the S.S. Modjeska, a Lake Ontario excursion boat intended as a day cruiser. The ship had been laid up since 1924 following a serious collision but, repaired and outfitted for service, it arrived in Owen Sound late in the season. Following several excursions and two round trips to Sault Ste. Marie, the Modjeska was refitted over the following winter to include cabins and staterooms to accommodate 100 or more overnight passengers. The vessel included a full dining service and, renamed S.S. Manitoulin, it began her first full season on June 6, 1927 with Captain Norman McKay at the wheel.

More Info
From the commencement of their operations, the S.S. Manitoulin (in 1927) and the S.S. Manasoo (in 1928) were capable of transporting automobiles. The Manasoo began her life as Macassa, was purchased by the Owen Sound Transportation company the year after the Manitoulin went into service and renamed Manasoo. The Manasoo had successfully completed its first season carrying passengers and freight; she was already laid up for the winter when she was sent to Manitoulin Island on a late season freight run. Returning from the Island, she ran into trouble and sank near Griffith’s Island. Six men made it to a life raft, and floated for 60 hours before being rescued by the crew of the Manitoba. 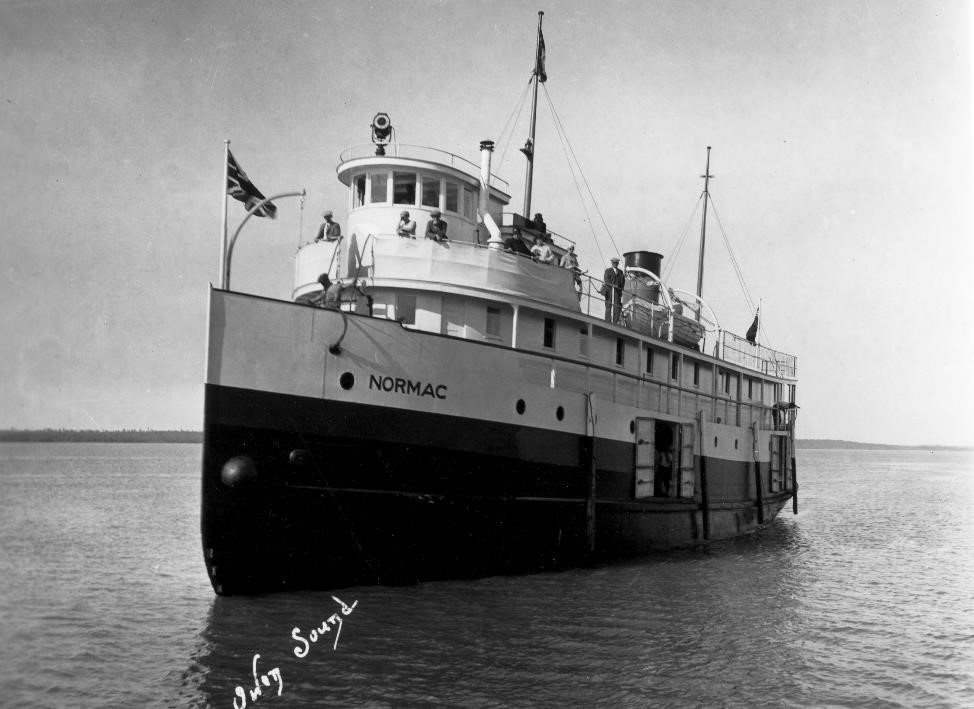 During the 1930 season the Owen Sound Transportation Company purchased a boat from the Detroit Fire Department, the SS James R. Elliot. It was delivered to the Midland Shipbuilding Company, which replaced her boiler and steam engine, making more room for freight and automobiles. Overnight cabins were added and, in 1931, the vessel was renamed the Normac, in honour of OSTC’s General Manager Captain Norman McKay. The Normac began her scheduled route in July, 1931, taking the place of the Manasoo, It departed Owen Sound on Thursdays and returned the following Tuesdays. During the 1932 season, the M.S. Normac was placed on the ferry run. She could transport 66 passengers and had staterooms for 40; as well she could carry 18 automobiles and 200 tons of freight. Departure times were more or less the same, with cars charged $4-$5 each way and passengers paying $2 for a one-way trip, or $3.50 return. Breakfast in the ship’s dining room was 40 cents; lunch and dinner were 50 cents. A stateroom could be had for a dollar more.

More Info
Built in 1946 at a cost of $547,000, the Norisle was able to carry 200 passengers and 50 cars when she began sailing in 1947 under veteran Captain Osburn Long. It was a huge leap forward for the company and its ferry service. The new ship began the ferry run in the 1947 season and the Caribou was retired. During her first season, the Norisle carried almost 13,000 vehicles and more than 40,000 people. 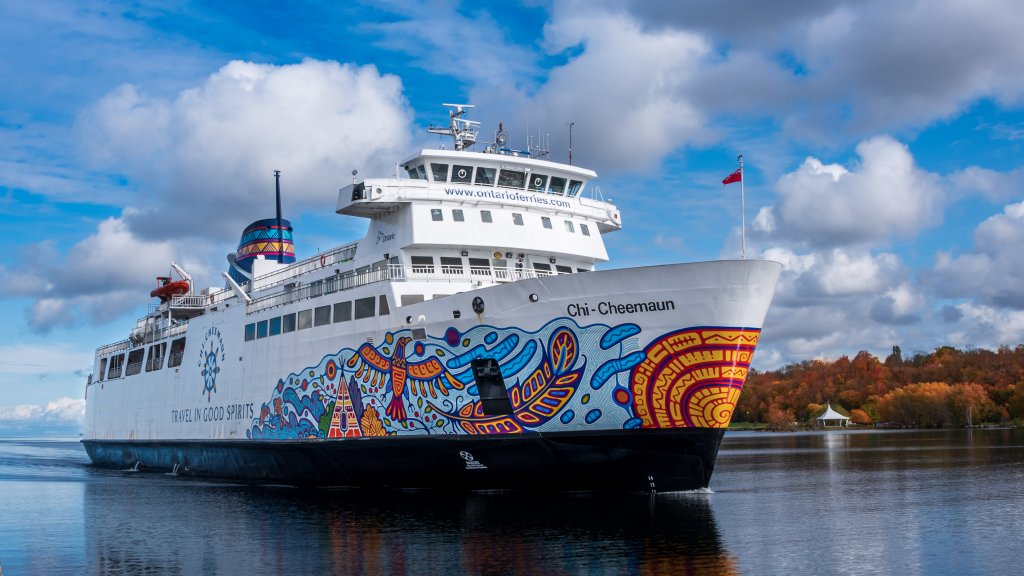 The government of Ontario acquired the Owen Sound Transportation Company first through the Ministry of Transportation and Communications who transferred it to the newly created Ministry of Northern Development and its Crown Corporation, Ontario Northland, in 1974. A new vessel was commissioned. Designed by British Colombia naval architects and built on Georgian Bay by the Collingwood Shipyards, the Chi Cheemaun (which means Big Canoe in
Ojibway) was one of the newest state-of-the-art ferries when she was launched in the fall of 1974. Branded with the colours of Ontario Northland and capable of carrying 638 passengers and close to 100 vehicles, she was able to make the crossing in under two hours. A few years into operation, interior retractable mezzanine ramps were installed on the vehicle deck, increasing her car carrying capacity to 150. The Norgoma and the Norisle were retired, and the
federal government paid the cost of constructing new ferry docking facilities at South Baymouth and Tobermory.